The illness of the Legionary was discovered in July 1976 when a pneumonia epidemic affected veterans of the American Legion during their annual congress that took place in Philadelphia. There were 4400 participants, 182 veterans fell ill (pneumonia) and 29 died.

The agent responsible for the appearance of this disease was a bacteria, until then unknown, and therefore was given the name of Legionella pneumphila. After reviewing what happened the researchers found that there was a bacteria in the air conditioning system of the Hotel.

From then on, many more cases have been found in many places with the common factor that the disease is directly connected with several water systems.

That’s why there are several laws that include the systems that should always be treated in order to control the possibility of generating the Legionnaire’s disease.

The origin of the Legionella outbreaks notified during the decade form 1999/2009 in %, following what was published by  the Centro Nacional de Epidemiologia del Instituto de Salud Carlos III (11/2010) 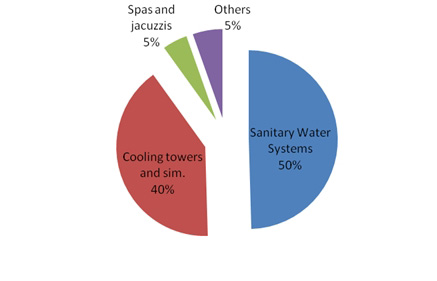 As we see in the graphic, despite what is generally believed, the most frequent focus of Legionella outbreaks are the sanitary water systems.

Actually there is a much stronger conscientiousness about the importance of controlling this bacteria, so the illness doesn’t spread affecting people, and most of the countries have developed a specific legislation in order to avoid it’s proliferation and minimize the number of cases.

In Spain there’s a Royal Decree that covers the whole nation, RD 865/2003, different autonomic legislation and, even, a technical guide has been developed (in 2007) that tries to facilitate the implementation of the different measures that have to be applied, once the risk associated with every water system has been evaluated. The actual legislation establishes that the installations that can pose risk of generating  Legionella outbreaks, are the following. 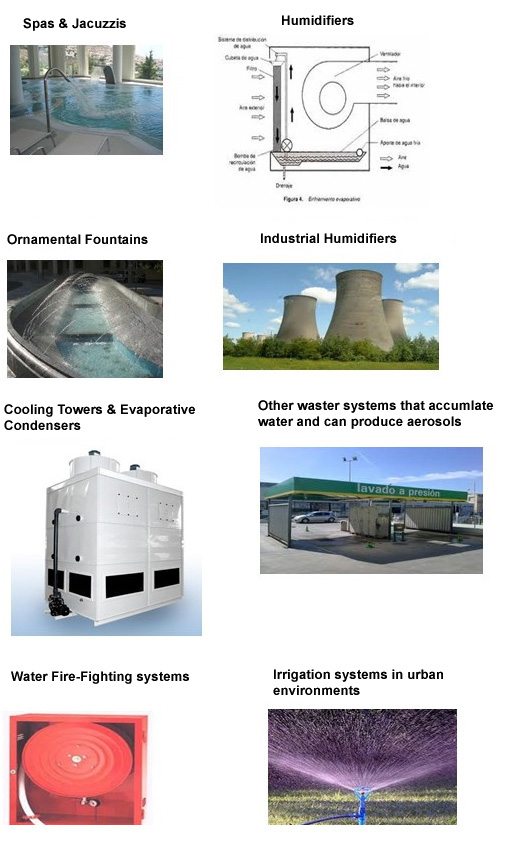 There are different approaches to control the appearance and spread of Legionella pneumophila. The previous steps are:

Although there are different ways of treating and controlling Legionella in water systems we will generally use the following:

What do we offer?

We can fulfill all the legal requirements and help you do it in an easy way.

We don’t just stick to one possible type of treatment but we can offer you the best option to cover your needs.

Since we offer different possibilities we not only have a technical answer to each situation but also can offer an economical approach.