Termites and other wood-destroying organisms (wood-destroying beetles, wood-decaying fungi and marine borers) have an important role in nature — they decompose wood and plant materials, recycling nutrients back into the environment for plants to grow. In the urban environment, however, termites and other wood-destroying organisms are largely undesirable. They can cause significant economic loss, injure trees, require broad use of insecticides and interrupt peoples’ lives. They can cause important economic losses , damage trees, need important quantities of biocides to eliminate de pest, and influence the life of people.

The most damaging animals that attack wooden structures are the termites. The beetles are the next most important group of insects which attack wood. On the basis of distinctive habits and problem solving challenges, the beetles rank near the top

Economic losses from pileworms (mollusks) and certain crustaceans occur in many areas where wood, concrete, and other materials come in contact with sea water. Fungi are also an important source of damage to wooden structures in areas where the climate is normally quite warm and humid. Wood rotting fungal spores are found everywhere and are instantly prepared to germinate as soon as suitable environmental conditions prevail

There is no “magic bullet” for this problem! It requires the use of several tools integrated into a comprehensive, long-term, multi-tactic IPM approach over large areas to develop a sustainable solution.

There is no one treatment to solve all the problems related with wood destroying organisms. There are different control strategies associated with different pests, different sites and different treatment possibilities. Normally it will require the use of several tools integrated into a comprehensive, long-term, multi-tactic IPM approach over large areas to develop a sustainable solution

Decay fungi can cause severe structural damage to any wood member, even wood species such as redwood and cedar. Every year they cause at least as much damage to structures as termites. All that is needed is a source of water in contact with the wood. Decay will occur in untreated wood in direct contact with ground, cement or concrete, or exposed to a source of moisture such as rain seepage, plumbing leaks, or condensation. Wood kept dry will never decay.

Once decay has started in a piece of wood, the rate and extent of deterioration will depend on conditions such as temperature and moisture content. Under suitable conditions, most fungi species develop fruiting bodies of various shapes, colors and sizes, These fruiting bodies contain enormous numbers of microscopic spores which act like seeds. If a spore comes in contact with a suitable material such as moist wood, it can germinate and spread the infestations. Many people exhibit allergic reactions to fungal spores.

Termites are primitive organisms, they exist even before ants. That’s why we could probably think that ants adopted and copied the complex social structure from termites and not the other way around. We can see today that the termites that live now are not very different from the ones that lived in our planet many years ago.

Broadly speaking, termites can be divided into four big groups, according to the way they build their nests. There are, humid wood termites, drywood termites, subterranean termites and arboreal termites. From the around 2600 known termite species, only a few of them constitute real pests. In fact, there are many species that don’t even eat wood but humus, herbs and lichens. Other species can’t survive living outside their natural habitat in jungles or meadows.

The termites have an incomplete metamorphosis which differentiates them from other social insects such as ants or wasps that have a complete metamorphosis. This means that the juveniles that emerge from the egg, show great resemblance with the adults, and through different molts will grow up in size and will, finally, reach the full appearance and size of an adult.

These insects are divided in castes or groups of individuals that have different functions. Subterranean termites have three castes: workers, soldiers and reproductive. Drywood termites and Humid wood termites don’t have real soldiers.

The soldiers are sterile and their only function is to protect the colony. They have such large heads and big mandibles that the soldiers must feed them. They are always in small numbers when compared to the quantity of termite workers.

The members that can produce bigger damage include:

The beetles that infest wood, in nature help reduce the dead trees and transform them in ways that can be used as nutrients for plants. But some of this beetles can cause heavy damage for wood used in structures or furniture. Normally it’s not easy to find the adults and/or the larvae. Therefore in order to detect if there’s and infestation we will search for evidence that will allow us to identify the type of pest that might be affecting you. The most important clues that we will find, include:

What must be done is, at least, find the beetle family that’s infesting the wood. Once identified, we will decide which will be the best control strategy for each pest. 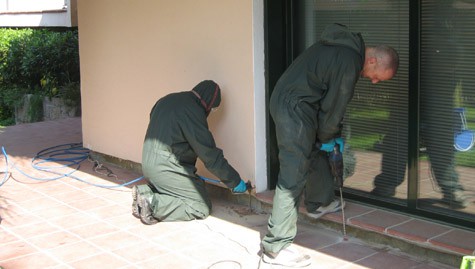